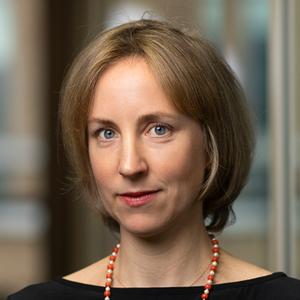 Ruth Foxe Blader is a thought leader in insurtech and fintech, and an investment director at
Anthemis.
Ruth began her career working to enable Fortune 500 companies to adapt to the digital age,
first as a digital project manager and eventually as SVP/Director at Ruder Finn. She ran early
web builds and developed comprehensive digital strategies for numerous organizations across
many industry verticals; from finance to pharma to governments and NGOs.
Following this diverse mandate, which spanned both the US and Europe, Ruth moved to PepsiCo
to design and execute the company’s global digital and social strategy. As part of her remit, she
launched and ran PepsiCo10—PepsiCo’s marketing startup accelerator initiative—which led to
her first experiences with early stage startup investing.
In 2011, Ruth joined Allianz SE to help Allianz bridge its gap with the emerging tech ecosystem.
As the founder of Allianz Digital Labs and Allianz Digital Accelerator, Ruth successfully
evangelized about the necessity to invest in startups as part of a successful emerging tech
strategy. Ruth was a founding member of the Allianz Ventures team, where she led investments
in Quantemplate, MoneyFarm and Lemonade, and helped to build a portfolio including
SimpleSurance, Nauto and Argus Cyber Security.
At Anthemis, Ruth leads two investment partnership vehicles, ABSV (with Baloise) and AEVO
(with UniCredit).
Ruth currently sits on the boards of Hokodo, Flock, Fluidly, InsurData, Kaiko, Omnius, PlusSimple and Stable.