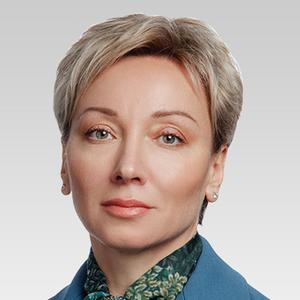 In 2016 awarded with Medal of the 2nd degree Order ‘For Service to the Homeland’.
1990–1992: Engineer, senior specialist at the firm Customs Terminal in the system of the USSR Customs Committee of the All-Union Foreign Economic Association Vneshterminalcomplex.
1992–1993: Chief specialist, acting head of the marketing, lending and exchange operations section of the Foreign Exchange Division of JSCB of Intersectoral Integration.
1993–1998: Deputy head of the foreign economic section, director of the Foreign Exchange Division, deputy director of the Customer Operations Department of Regional JSCB Moskva.
1998–2003: Director of the Settlements Department of OJSC JSCB Avtobank.
2003–2007: Director of the Retail Sales Development Department, Director of the Operations and Cash Services Directorate, Director of the Remote Service and Bank Card Operations Directorate, Director of the Retail Service Directorate, Director of the IT Directorate of OJSC JSCB Rosbank.
2007–2014: Deputy Chairperson of the Management Board, member of the Management Board, chairperson of the Banking and Information Technology Committee of OJSC JSCB Rosbank of Societe Generale Group.
2009–2014: Chairperson of the Board of Directors of United Settlement System NCO.
2014–2017: Deputy Governor of the Central Bank of the Russian Federation.
From September 1, 2017: First Deputy Governor of the Central Bank of the Russian Federation.
Member of the Bank of Russia Board of Directors (appointed on 2 December 2016).