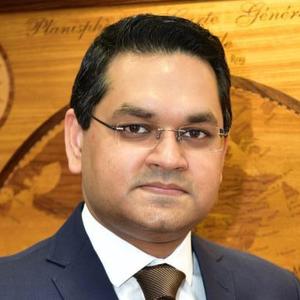 Harvesh SEEGOLAM is the Chief Executive of the Financial Services Commission (FSC) of Mauritius since July 2017.

Harvesh is a key contributor and a member of various technical committees at the level of the Organisation for Economic Cooperation and Development (OECD). He has driven the setting up of the FSC Regional Centre of Excellence – an initiative launched in collaboration with the OECD, aiming at furthering capacity building and research in the fields of financial services, competition and digital finance in Sub Saharan Africa for regulatory bodies and law enforcement agencies.

Focussing on strengthening cooperation with the FSC’s counterparts and international organisations, he is actively involved at the level of the IOSCO, the IAIS, the IOPS and the Southern African Development Community (SADC) Committee on Insurance, Securities and Non-Banking Financial Authorities (CISNA), amongst others.

Harvesh continues to spearhead numerous initiatives in line with the mandate of the FSC and the development of Mauritius as an International Financial Centre. He is instrumental in delivering on the national strategy with respect to AML/CFT, financial reporting, innovation and financial services and financial technologies.

Driving a culture of innovation throughout the industry, Harvesh has also been at the forefront of the establishment of the National Regulatory Sandbox Licence Committee in 2018, and is a member of the Mauritius Artificial Intelligence Council.

Prior to joining the FSC, Harvesh has set up and ran the Financial Services Promotion Agency, institution which operated under the aegis of the Ministry of Finance and Economic Development, with the mandate of promoting Mauritius as an International Financial Centre. Harvesh has equally been part of the strategic team leading the Board of Investment of Mauritius, now the Economic Development Board, where he was in charge of the Innovation, Technology and Services cluster.

Harvesh holds a BSc (Hon) in Economics and an MSc in International Finance, in addition to several other qualifications in accountancy and finance. He is an alumni of the London School of Economics & Political Science, the University College London, Durham University, as well as, the SKEMA ‘Grande Ecole de Commerce’ in France.