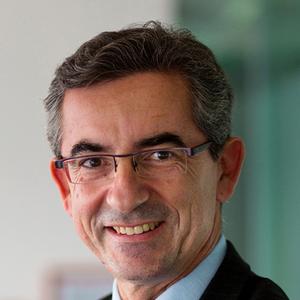 Worldline Chief Executive Officer
A graduate from “Ecole Nationale d’Administration”, Gilles Grapinet joined the French Inspection Générale des Finances” in 1992, where he worked for four years on numerous financial audits and assessment assignments for the French Government and international organisations (International Monetary Fund, World Bank, …).
In 1996, he moved to the French tax department as Head of Strategy and Controlling before being appointed Director of Information Systems and Strategy.
Between 2000 and 2002, he was appointed CIO, head of the nation-wide “Copernic program”, aimed at rebuilding entirely the French tax information systems and creating a multi-channel, service-oriented e-tax administration.
Between 2003 and end 2004, he joined the private office of the French Prime Minister as Senior Advisor for economic and financial affairs. And between 2005 and 2007, he was director and chief of staff of the French economy, finance and industry Minister’s private office.
In 2007, Gilles Grapinet joined the Executive Committee of the international banking Group Credit Agricole SA, where he was Head of Strategy before being appointed CEO of the Payment Systems & Services business division.
He joined Atos from December 2008 as Senior Executive Vice-President, in charge of Global Sales, Consulting and the High-Tech Transactional Businesses until 2013. As Atos, SEVP, he was also in charge of Global Functions until January 2019.
Since July 2013, in addition of his position in Atos, he was appointed Worldline Chief Executive Officer, and has led the successful partial listing of this subsidiary of the Atos Group which has since become the European leader in electronic Payment services, notably after the acquisition of Equens in 2016 and SIX Payment Services in 2018, with a market capitalization moving from c.2€ in June 2014 to c.10B€ early 2019.
Worldline became fully independent from Atos on May 3rd, 2019.